On Sunday 20 June there was a presentation at the Casa de la Cultura in Jimena de la Frontera, of a book called ‘Testimonios’ which contains the transcripts of interviews given to the Foro por la Memoria del Campo de Gibraltar by local people who are hoping to recover the remains of their relatives, who were victims of Franco, from the local cemetery. The book’s author, Juan Leon Moriche, gave a moving address in which he paid tribute to the families, saying he was well aware that this had been the first time that most of them had ever spoken outside their family circles of what had happened to their relatives. He said that when emotional pain is shared, it is lessened but the families of victims of Franco had never been able to experience that because they were too scareded to speak. He also pointed out that Franco not only wanted to exterminate all those who did not share his fascist ideology, but also wanted their memories to be wiped out completely; the fact that this meeting was taking place, and the book has been published, is in itself a sign that he had not succeeded.
The book also contains information from Jesús Román Román, who is leading the exhumation works of the mass graves in the old cemetery in the castle in Jimena.
The meeting and presentation were organised by the Foro por la Memoria del Campo de Gibraltar, Jimena council, AFRESAMA, the Casa de la Memoria and the Ateneo Republicano del Campo del Gibraltar. 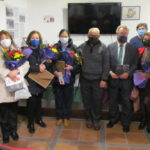