The Casa de la Memoria Association is making itself better-known

The Casa de la Memoria Association was officially presented at an event in San Roque on Monday 14 June, as part of the activities organised by the council to commemorate the Day of Memory and Homage to Victims of the Military Coup and Franco Dictatorship. The association forms part of the Casa de la Memoria La Sauceda and its president is Margarita Díaz. It is involved in numerous aspects of the historical memory movement, and its activities so far, despite the pandemic, have included a cycle of conferences via its digital radio station, La Voz de la Memoria, the publication of different books and Cuatro Esquinas magazine, organising talks and ongoing cataloguing and classifying work in the Casa de la memoria archive and library. Margarita explained that the association plans to hold presentations in other towns to raise awareness among people who are interested in historical memory and the recent history of Spain, and new members and volunteers are always welcome.

Compártelo
2021-06-21
Entrada anterior: Cádiz city hall removes a plaque dedicated to a poet
Siguiente entrada: Presentation of a book with testimonies from relatives of the victims of Franco in Jimena de la Frontera 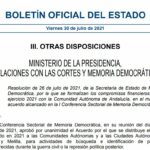 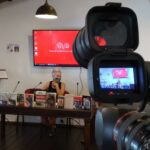